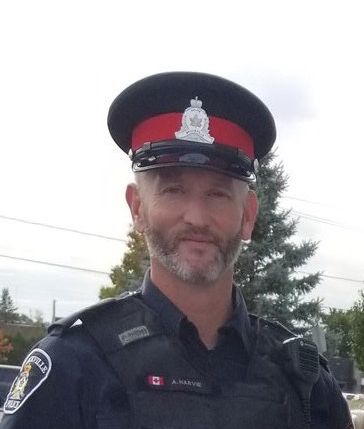 The Brockville Police Services Board is pleased to announce the appointment of Andrew Harvie as Deputy Chief of Police effective November 1, 2021.

Deputy Chief Harvie began his career in 1998 with the Toronto Police Service. He moved to Brockville in January of 2001 and worked the bulk of his career in uniform.  During his tenure as a constable, he served in Criminal Investigations, Emergency Response Team and as a police instructor.  He was promoted to rank of Sergeant in 2009 and to Staff Sergeant in 2018.

He was born and raised in Montreal and moved to Russell, Ontario in 1979.  He spent two years living in Saudi Arabia and returned to Russell in 1986.  He attended Algonquin College and obtained a diploma in Law and Security Administration.  He has served in the Canadian Primary Reserves with the Governor General Foot Guards and has worked as a correctional officer for both the federal and provincial system. Andrew has received extensive training through the Ontario Police College.  Deputy Chief Harvie is a member of the Ontario Association of Chiefs of Police (OACP) and the Canadian Association of Chiefs of Police (CACP).

Deputy Chief Harvie is a valuable member who has displayed dedication to the Service and the Community. The Board looks forward to working with him as he assumes his new role.