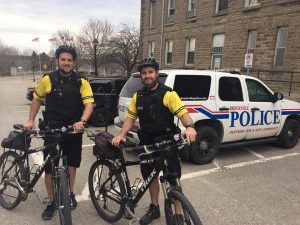 The Brockville Police began deploying bicycles in 1996. This opportunity offers officers on patrol the ability to travel on the bike paths and interact with the public.

Brockville City parks, pathways and the waterfront have become much more accessible, allowing the Bike Patrol Officer to approach unnoticed much more easily than if they were in a police cruiser. Bike Patrol officers also find that the public finds them more approachable on a bike as opposed to being in a cruiser. Officers deal with liquor, drug offences, alarms, disturbances and many other calls, however, they are also able to handle any other calls that may be assigned to them throughout the course of their shift.

The Brockville Police recently purchased a two bike rack for the back of one of the patrol vehicles which permits the officers the ability to quickly transition from their bicycle to their vehicle. This is of great value when the officers are required on the opposite end of the City.

Bike Patrol officers also attend many special events within the community such as RibFest, The Poker Run and the Hydroplane Races. They are also utilized for other events when suitable.

Officers assigned to the bicycle patrol act as Ambassadors for the community answering questions for tourists and providing information about Brockville to those who ask. They will offer bicycle safety information to other cyclists and work with our Community Safety Officer at Bicycle Safety Rodeo’s.

The Bicycle patrol is invaluable to the community and assists us in being more visible in areas in which a patrol vehicle may not be able to go. You can expect to see the bicycle patrol out this summer and when you do, please take a moment and meet the officers.